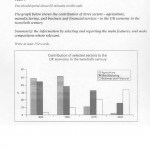 The bar chart illustrates the relative importance of three different areas of the UK economy, namely agriculture, production and finance, over a period of 100 years.

It is clear that agriculture and industry were almost equally important for the UK in 1900, each of them accounting for almost 50% of the UK economy. Business and finance, on the contrary, did not seem to be significant at that time and contributed less than 5% to the state revenue.

In 1950 agriculture reached its highest peak during the whole period, making up over 50% of the income of the country. However, it declined rapidly in 1975 and the downward trend continued until 2000(10% and 2% respectively). Similarly, the contribution of the heavy industry diminished, although the drop was not as dramatic as in farming. Production accounted for 40% of the GDP in 1950 and for slightly more than 15% at the end of the period.

The pattern was opposite in business and finance. As time passed, financial institutions and business organisations played an increasingly important role in the UK economy. Their share grew from about 3% in 1900 to over 35% in 2000.

Overall, there was a noticeable change in the sectors which played a decisive role in forming the UK national income. Traditional areas such as production and land farming were overtaken by the banking and service sector.